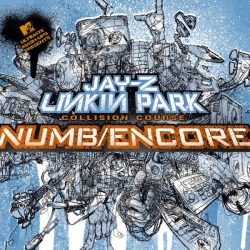 yo yo yo
I have a dream of a scene between the green hills
Clouds pull away, and the sunlight’s revealed
People don’t talk about keeping’ it real
It’s understood that they actually will
And intoxicated and stimulated MC’s floatin in the trees, paranoid
Are gone in the breeze
Watch them flee, hip-hop hits, take a walk with me
And what you’ll see is a land where the sands made of crushed up wax
And the sky beyond you Is krylon blue
And everybody speaks in a dialective rhyme
MC’s have left materialism behind them
Meanwhile, I just grip my mic
And hope me and my crew make it through alright
Because say what you will
And say what you might
But don’t ignore who it’s for at the end of the night
I’ve see a lot of shit I’ve talk to a bum out on Sunset Strip
He asked me how would you feel if everybody acted like you didn’t exist
You’d lose your grip you’d Probably eventually flip
So let it be known, the only reason that we do this
So you can pick it up and just bang ya head to it
While MC’s fight to see who can be the commonest
We float overhead like a space odyssey monolith
Overseeing the game
Over being part of the same old thing
It’s all gonna change, in a hurricane
Darkness and pain, and acidic rain and promises you won’t do it again
Meanwhile, I just grip this mic
at the wake of show
doin in it
we rockin all night
ready to spit that?
go ahead an spit that spit that
me and Rocka haven’t begun to hit you yet
when I get you open your insides will make you wet
you bet
hostile when I’m rappin to you
got you asking god how we let this happen to you
Bringin on the fat lady
And the fat man too
And shoot them both out of a canon
Over Katmandu
If you’re sleepin, I’m knockin out the sandman too
I’ll beat the yellow out of you
Till you’re black and blue
Laughed at you
And any MC who wants to (something, can’t make it out)
MCs so mixed up their bones are pullin muscles
And their bladders leakin out
And down their legs into a puddle
What’s that?
Laying you flat survival tacticly
You wanna battle me?
You better start thinkin practicly
Line after line
Casually rhymin this rapidly
And endin this
You never get a chance to buzz back at me