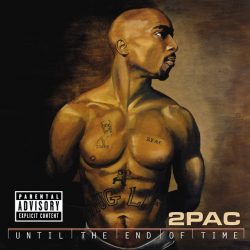 [2Pac]
Nigga – I hear even the smaller G’s be dippin Chevy Impalas
while flossin they gold D’s, O.G.’s, is who they follow
We (?)swallow tomorrow(?) see, what we leave is hollow
We feed violence and greed, let ‘em bleed tomorrow
In time, they grip a nine, sippin wine – hit grass
‘til I be starin watch the parents sacrifice they child
The love’s gone, a thug’s home, with no love
Feelin so strong, make young boys into drug lords
Now one for adolescents, now dos for dose
Keep yo’ friends by your side, even close your foes
Now three for Johnny Law tryin to make my chips
I never pulled the trigger, didn’t touch that bitch
Throw yo’ hands in the air, it’s a robbery
.. thinkin ‘Pac, would you ride with me
Let’s go see what our enemies talkin bout
When G’s enter the house nobody’s walkin out
This ain’t livin, it’s similar to prison, we trapped
My homies jealous plus they tell us that the phones is tapped
I watch my back twenty-fo’ seven
and never let a busta send a G to ghetto heaven, you know!
This is how it goes when we floss with foes
Before I toss yo’ hoe, it’ll cost you mo’
I do shows make a lot of dough, murder my foes
But I’d give it all up, if it would help you grow
This ain’t livin

[2Pac]
Peep it – gunfire is produced at alarmin rates
Today’s youth, grip the shit, get in the car and break
“It Takes a Nation of Millions” if we intend to stop the killin
Just search your feelings, participate in some (?)
They our seeds and when they bleed, we bleed
That’s what becomes of lonely children, they turn to G’s
Heavenly father can you rescue, my young nation
rest the Lord will protect you, respect due
Not a threat as I step in blue, and check those
that oppose when I froze them fools, and who are you
to watch me fall farther
I disappeared, reappeared as the .. follow me now
Skippin class, and livin fast, will get yo’ ass
stuck in the pen, doin life plus ten
Young brother pump yo’ brakes for me, before you choke
won’t ya soak up some game from yo’ big homies
This ain’t livin, we givin you jewelsl, use ‘em as tools
Explode on they industry and fade them fools
You know the rules, gotta be a rider
You can run the red lights but read the street signs, heyy
This for all of y’all that keep on raisin hell
Put a pistol in your hand and let you fade yourself
It ain’t right, what you put your momma through, young G
Gotta change your life, take the game from me
This ain’t livin