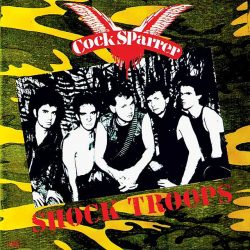 When we were at school I thought he had it sussed
Fighting the law with the rest of us
Smoking, drinking, acting cool.
(‘Til) they started treating him like a fool
Then he stayed on his own for most of the time
Dreaming dreams of a life of crime
In and out of trouble, he cheated and lied
But who’d have thought he’d join the other side

Down to Hendon with the boys in blue
It’s amazing what a few weeks can do
Out in the car, out on the street
South of the river on the frontline beat

Cracking heads, it was all a game
A finger was pointed and he got the blame
Now he’s back where he started, he ain’t got a pound
Queing with the sorts he used to kick around.