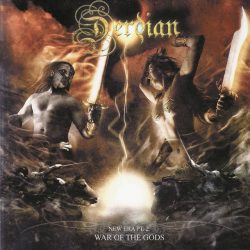 [Lyrics and Music by Enrico Pistolese]

Nightfall, shadows of suspects in me!
Golstar, traitor of Derdian I feel!
For the revolution of rage, my Lord – will not have me!
From the cradle to the grave – I will hate!
(and) I must investigate, betrayer!
Liar! – Traitor! Bastard! I’m your Master, I will punish you!

So I’m thinking for a punishment
He’s a creature so false
So I’m the tyrant of Derdian or what?

He should be on a mission to — kill my mortal enemy, lord Raighon
And instead he waste his time — with that filthy female, named Loren

[CHORUS:]
Let the evil come to me
I want a human disaster
I will find the most bloody revenge upon him – upon him
I despise his behaviour
In the dark he will suffer
I’m the bringer of sorrow — malicious I’ll be, bad I will be!

I will destroy the things you love, you know I hate you
This is the secret of my force, disaster all around I bring
The walls of Astar will collapse, and burn forever!
What kind of promise you received from Exenthar, the Astar’s king?

Nightfall, shadows of suspects in me! betrayer of my kingdom!
You will try my own justice, vassal come here and listen!